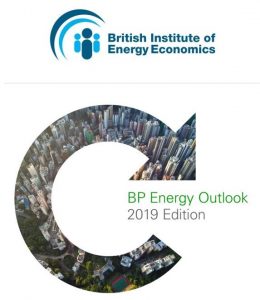 Through the auspices of the British Institute of Energy Economics, Managing Partner Keith Evans attended the launch of BP’s Energy Outlook to 2040.  The examination of 5 key themes and various scenarios relevant to the Dual Challenge of higher energy demand (potentially 30% higher than today) and lower carbon emissions was as exhaustive and fascinating as ever.

The BP Press Release accompanying the launch is produced in full below.  The Outlook report can be downloaded from www.bp.com/energyoutlook  and additional country & regional insights and view other material such as videos or an animation can be accessed.

The 2019 edition of BP’s Energy Outlook, published today, explores the key uncertainties that could impact the shape of global energy markets out to 2040.  The greatest uncertainties over this period involve the need for more energy to support continued global economic growth and rising prosperity, together with the need for a more rapid transition to a lower-carbon future.  These scenarios highlight the dual challenge that the world is facing.  The Outlook also considers a number of other issues including the possible impact of an escalation in trade disputes and the implications of a significant tightening in the regulation of plastics.

Much of the narrative in the Outlook is based on its evolving transition scenario.  This scenario and the others considered in the Outlook are not predictions of what is likely to happen; instead, they explore the possible implications of different judgements and assumptions.

In the ‘Evolving Transition’ scenario, which assumes that government policies, technologies and societal preferences evolve in a manner and speed similar to the recent past:

“The Outlook again brings into sharp focus just how fast the world’s energy systems are changing, and how the dual challenge of more energy with fewer emissions is framing the future.  Meeting this challenge will undoubtedly require many forms of energy to play a role,” said Bob Dudley.

“Predicting how this energy transition will evolve is a vast, complex challenge.  In BP, we know the outcome that’s needed, but we don’t know the exact path the transition will take.  Our strategy offers us the flexibility and agility we need to meet this uncertainty head on.”

“The world of energy is changing,” agrees Spencer Dale.  “Renewables and natural gas together account for the great majority of the growth in primary energy.  In our evolving transition scenario, 85% of new energy is lower carbon.”

Beyond the evolving transition scenario, the Outlook considers a number of additional scenarios.  Some of the key ones are outlined below.

More energy will be needed to support growth and enable billions of people to move from low to middle incomes; this is explored in the more energy scenario.

There is a strong link between human progress and energy consumption; the UN Human Development Index suggests that increases in energy consumption of up to around 100 gigajoules (GJ) per head are associated with substantial increases in human development and well-being.  Today, around 80% of the world’s population live in countries where average energy consumption is less than 100 GJ per head.  In order to reduce that number to one-third of the population by 2040, the world would require around 65% more energy than today, or 25% more energy than needed in the evolving transition scenario.  The increase in energy required over and above the evolving transition scenario is roughly the equivalent of China’s entire energy consumption in 2017.

Together with the more energy scenario, the Outlook also highlights the need for further action to reduce carbon emissions.  This is the dual challenge for the world – to provide more energy with fewer emissions.

The rapid transition scenario is the combination of analyses throughout the Outlook which brings together in a single scenario the policy measures in separate lower carbon scenarios for industry and buildings, transport and power.  Doing so results in around a 45% decline in carbon emissions by 2040 relative to current levels – which is broadly in the middle of a sample of external projections with claim to be consistent with meeting the Paris climate goals.

This fall reflects a combination of: gains in energy efficiency; a switch to lower-carbon fuels; material use of CCUS; and, of particular importance in the power sector, a significant rise in the carbon price.

“Polices aimed at the power sector are central to achieving a material reduction in carbon emissions over the next 20 years…most of the low-hanging fruit in terms of reducing carbon emissions is outside of the transport sector,” said Dale.

Even in the rapid transition scenario, a significant level of carbon emissions remain in 2040.  In order to meet the Paris climate goals, in the second half of the century these remaining emissions would need to be greatly reduced and offset with negative emissions.  This year’s Outlook considers which technologies and developments may play a central role in this reduction beyond 2040.

A key development would be a near-complete decarbonisation of the power sector – requiring greater use of renewables and CCUS in conjunction with natural gas – together with greater electrification of end-use activities (including transport).  For those end-uses that cannot be electrified, other forms of low-carbon energy and energy carriers will be crucial, potentially including hydrogen and bioenergy.  Additionally, the importance of the circular economy and greater adoption of carbon storage and removal techniques are highlighted.

International trade underpins economic growth and allows countries to diversify their source of energy.  In the less globalization scenario the Outlook explores the possible impact that escalating trade disputes could have on the global energy system.

“The message from history is that concerns about energy security can have persistent, scarring effects,” said Dale.

The scenario highlights how a reduction in openness and trade associated with an escalation in trade disputes could reduce worldwide GDP and therefore energy demand.  Moreover, increasing concerns about energy security may cause countries to favour domestically-produced energy, leading to a sharp reduction in energy trade.  The greatest impact is on net energy exporters, who suffer a material slowdown in the growth of oil and gas exports.

The single-largest projected source of oil demand growth over the next 20 years is from the non-combusted use of liquid fuels in industry, particularly as a feedstock for petrochemicals, driven by the increasing production of plastics.  Growth of non-combusted demand in the evolving transition scenario is, however, slower than in the past, reflecting the assumption that regulations governing the use and recycling of plastics tighten materially over the next 20 years.

In this scenario, oil demand rises more slowly than in the evolving transition scenario.  However, the Outlook cautions that the full impact on energy growth and the environment will depend on the alternative materials that may be used in place of single-use plastics.  A ban on single-use plastics could result in an increase in energy demand and carbon emissions without further advances in alternative materials and the widespread use of collection and reuse systems.

This press release contains forward-looking statements, particularly those regarding the global energy transition, changes to the fuel mix, global economic growth, population, productivity and prosperity growth, energy markets, energy demand, consumption, production and supply, energy efficiency, mobility developments, policy support for renewable energies and other low carbon alternatives, sources of energy supply, technological developments, trade disputes and growth of carbon emissions.  Forward-looking statements involve risks and uncertainties because they relate to events, and depend on circumstances that will or may occur in the future.  Actual outcomes may differ depending on a variety of factors, including product supply, demand and pricing; political stability; general economic conditions; demographic changes; legal and regulatory developments; availability of new technologies; natural disasters and adverse weather conditions; wars and acts of terrorism or