Carbon Neutral – What does it mean for us in the UK?

Peter Dixon of the Acumen7 network provides a pragmatic and concise summary of the UK’s carbon neutrality challenge. No longer a topic for tomorrow, Peter points out the very real urgency of the crisis that now faces us.

Carbon Neutral – What does it mean for us in the UK?

Peter Dixon of the Acumen7 network provides a pragmatic and concise summary of the UK’s carbon neutrality challenge. No longer a topic for tomorrow, Peter points out the very real urgency of the crisis that now faces us.

Carbon Neutral – What does it mean for all of us in the UK?

Suddenly, Carbon Neutral is all over the news. Why the excitement when 2050 is a long way off? And surely, it’s other people and other businesses which will be affected? Not so – nearly everything we use will need to be different in some way, and the process of making those changes is only just starting.

What is Carbon Neutral?

Wikipedia defines it as “Carbon neutrality, or having a net zero carbon footprint, refers to achieving net zero carbon dioxide emissions by balancing carbon emissions with carbon removal or simply eliminating carbon emissions altogether.” The UK Government has specified in law that the UK will be carbon neutral by 2050. The sale of petrol, diesel and hybrid cars will be banned from 2035. It is likely that the installation of gas heating boilers will be banned soon in England, as they will be in Scotland from 2024. So this is real, and, at the moment though, still ‘somebody else’s problem’. Wrong.

Where are the CO2 emissions coming from?

Focusing on the UK only, here’s what has happened: 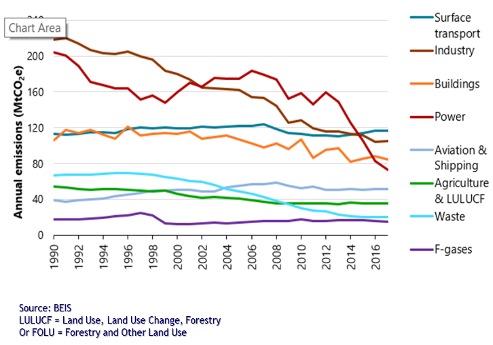 Emissions from the Power Generation sector have more than halved between 1990 and 2017 and that trend continues, a commendable achievement but still a long way to go. This leaves Surface Transport, Industry and Buildings as the next biggest emitters, but note the big reductions by industry (probably reflecting the decline in heavy industries in that period). There’s a long way to go to be carbon neutral….so let’s look in brief at four major sectors.

Electric cars (EVs) are coming to the fore, and critical questions are emerging quickly – like, how on earth can we charge them? But there is a presumption here that battery cars will be the future….not so, necessarily, maybe hydrogen fueled fuel-cell cars would be better? This recalls the old Betamax versus VHS argument – VHS got there first and ‘won’ despite Betamax being the better technology. But here, there are wider issues to do with the building heat market and the fueling of HGVs – if hydrogen is used for, these then that would change the competitive situation for cars. Soon, the government will need to make a major decision as to whether to change the gas network over to hydrogen…or possibly abandon the network altogether.

Non hydrogen EVs using batteries need charging – so how could every car be charged and has the electricity grid got the capacity? There is a variety of methods, and we are beginning to see the emergence of charge points on the streets. Early adopters are putting in home chargers. Lamp posts are becoming charge points. A basic problem is the sheer quantity of electricity needed. A battery’s capacity is measured in kWh (Kilowatt Hours). A typical medium size battery is 60kWh. So to charge it in say 6 hours would need 10 Kilowatts (kW) – and the normal single phase supply to a house is around 7.5kW, so the house supply would need boosting. In a street with multiple cars charging, the street supply would need significantly boosting.

Other methods of charging are possible in future. Inductance charging requires positioning the vehicle over a charging plate, with no physical links. This resolves the problem of cables trailing over payments. Milton Keynes with Arup have been running electric buses for several years using this technology. One day, we may see charging on the move with supply plates underneath major roads…

Light commercial vehicles are likely to follow the same technology as cars. HGVs, it is suggested, could also use batteries and recharge at depots, or even pick up charge from catenaries on major roads. However, we know how often cables are brought down on the railways, so imagine how often we might see live electric cables snaking over a motorway….

A real possibility is to fuel HGVs with hydrogen however, so it is clear that the possibility of generating sufficient hydrogen will need to be explored.

Once all vehicles are EVs, the Treasury will lose ~£28bn (current sum) in fuel tax….so will we have road pricing? Where else could the tax revenue come from?

Heating buildings takes a large amount of energy, and the use of gas, predominantly in homes, causes the emission of large quantities of CO2. To a certain extent, altering how new homes are heated is simplest: ban gas boilers and insist on the use of air source heat pumps, or pure electrical heating, along with rigorous installation standards. The major issue lies with the existing ~24m housing stock, where some are connected to the gas grid, and some are not. The approach being pursued is summarised below: 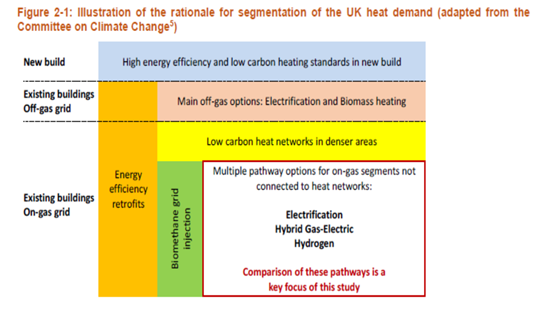 District heating and electrical heating are major options, but the biggest issue is whether to either shut the gas grid or turn it over progressively to hydrogen. Which leads to the topic of power generation, since these topics are inter-linked.

Overall, electricity consumption and generation have dropped over the last 25 years or so, whilst CO2 emissions have fallen significantly, as previously observed. This is due to the huge drop in coal use and the rise of renewables in the generation mix: 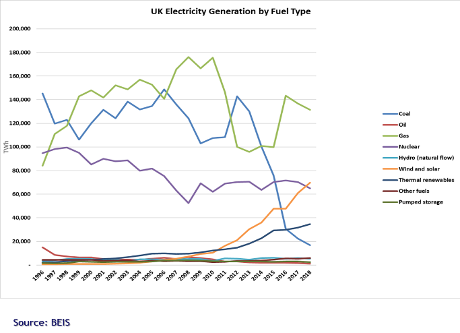 In future, for power generation to be carbon neutral, and taking into account the large increased demand for electricity arising from EVs and heating, generation capacity has to increase by about 150%, although output only needs to increase by ~100% – this is because of the variability of renewables. The Committee on Climate Change (CCC) shows this projection of future output by source: 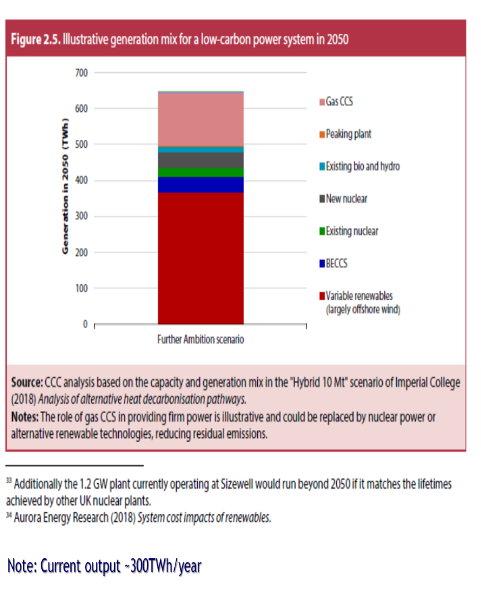 There are two critical factors which influence this projection. First, unless the time of charging of EVs is managed, capacity requirements will be much larger. To do this, National Grid proposes Smart Charging, which is a system where electric vehicles, charging stations and charging operators share data connections. Through smart charging, the charging stations may monitor, manage, and restrict the use of charging devices to optimize energy consumption. Compared with uncontrolled charging, smart charging will flatten the electricity usage peak by shifting the peak due to vehicle charging away from the peak due to other consumption.

Second, if hydrogen is to be used in a major way, then electricity demand is very different, as shown in this analysis by Aurora with rather different assumptions on basic demand: 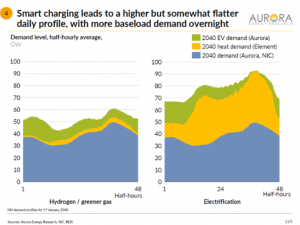 To supply this increased demand of 100-150 Gigawatts, CCC projects very large increases in wind, both onshore and offshore, as well as of solar. Not unreasonably, one asks whether there is sufficient space for the extra (wind particularly) capacity. Their research suggests that even if on-shore wind increase is very low, there is more than adequate sea-bed to house the extra turbines, and that only an approximate doubling in installation rate over current rate would be required.

The CCC is still counting on a certain amount of nuclear capacity. Major plants may or may not be built but modular reactors continue to be an option – these have some advantages: for example, models already exist, being derived from marine reactors, and could be quickly installed with very positive impacts upon cash flows.

This sector is possibly the most problematic. Whilst tests of light electric planes are taking place currently, it is hard to foresee the use of batteries in longer range aircraft because of the weight (never say never of course), but the current focus of the industry appears to be on bio-fuels.

With the probable increased costs of these future fuels, it is possible that the cost of flying will deter people from flying so much….maybe new airport capacity would no longer be required?

As for shipping, which is a large emitter of CO2, but also other pollutants from the use of very heavy fuel oils, again hydrogen is proposed as a fuel. Tests are currently taking place in Scotland of a small hydrogen fuelled ferry. A global hydrogen bunkering system would be required very quickly to satisfy the demands of international shipping.

Where would we get the hydrogen?

Steam methane reforming is the dominant commercial technology, and currently produces hydrogen on a large scale but is not currently low carbon. Carbon capture is therefore essential with this process and research is underway.

Electrolytic hydrogen production, also known as electrolysis, splits water into hydrogen and oxygen using electricity in an electrolysis cell. Electrolysis produces pure hydrogen which is ideal for low temperature fuel cells for example in electric vehicles. Commercial electrolysers are on the market and have been in use for many years. However, it is clear to see that both methods may imply cost penalties over direct use of electricity.

What will it all cost?

Simply, a very large amount, although the experts are still working on the basis of massive uncertainties. The CCC estimates the extra annual ‘resource costs’ would be around £40-£50bn, but point out that within that, transport costs may be lower since EVs will soon be cheaper than internal combustion engine vehicles….and what are the alternatives? Continuing warming?

What do we think about all this?

Thirty years feels like a luxuriously long time. It isn’t. This is a huge change project and process. Everything needs to change – we will be driving electric cars, using heat pumps and/or electric heating, flying less (?) in bio-fuelled planes, using even more wind turbines and solar panels…..And what will the stranded oil companies do?

We’ve omitted a couple of sectors in this discussion and haven’t even touched on Carbon Capture and Storage which is required in all the scenarios analysed by the CCC. No large scale commercially viable CCS processes exist at the moment, although we do know that some Carbon Capture and Utilisation (CCU) plants are now operating profitably. And we’ve only looked at the UK.

Given the time scales within which actions must be taken, the government must soon make the major strategic decision as to whether to back a ‘hydrogen economy’ – or not. Such a decision probably needs to be taken with international consultation if shipping is to be hydrogen fuelled.

The “Carbon Neutral” project needs to be managed with urgency, visibility of goals, accountabilities and achievements. The UK Government has a lot to do.